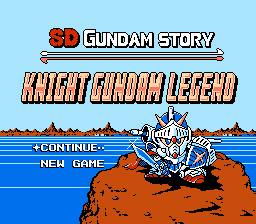 SD Gundam Story - Knight Gundam Legend is a JRPG for the Nintendo Famicom, which has been translated to the delight of English-speaking SD Gundam fans everywhere.

In the kingdom of Lacroa, King Revil and his daughter, Princess Fraw, are sitting in their throne room when suddenly--a monster grabs the young girl, and carries her away! Knowing this must be the work of the dark lord Satan Gundam, the king calls upon the greatest knight in the land: Knight Gundam! Along with his allies Warrior Guncannon and Priest Guntank, Gundam sets off on his quest to rescue Princess Fraw, fight the Zeon Army, and defeat Satan Gundam! 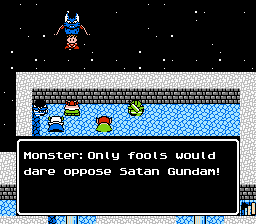 Knight Gundam - A heroic champion of justice, he fights evil in with swords and a bit of sorcery! His popularity transcends the series, making numerous appearances in works like SD Musha Gundam and Gundam Breaker.

Warrior Guncannon - The most powerful knight in Lacroa, Guncannon never tires of knocking down foe after foe. While he has no magic ability, he has incredibly powerful attacks. Seems to slack off a bit.

Priest Guntank - When it comes to magic, look no further than this tank! While he lacks the strength to wield any heavy weapons or armor, he packs a devastating punch with his magic spells. He's also the cutest of the bunch, in my opinion.

Amuro - A young knight, Amuro initially confuses Knight Gundam for a Zeon soldier, and attacks him. After clearing the confusion, he joins the party, with a mix of physical and magical power like the Gundam.

Sayla - Another knight, this warrior seeks to find her brother Char, who she was separated by from birth. She joins the party, though is not controllable. Instead, she fights as a sort of assist, selecting her own moves in a matter akin to Shin Megami Tensei IV's non-demon allies.

Just like most JRPGs, gameplay largely consists of movement between an overworld map and and smaller dungeon and town maps, with turn based battles that task the player to use a combination of physical attacks and magical spells to defeat monsters, though all with Gundam twists. Rather than a FIREBALL, magic GUNs are fired, and rather than a regular monster, it's often a Zeon-flavored version, like the Goblin Zaku or the Adzam Slime. 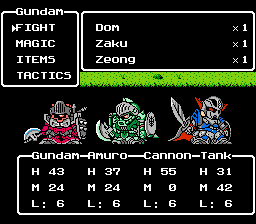 The only real standout feature of the game beyond the Gundam theme is CARDASS, a collectible card game that has you using your Cardass cards (available in gachapon machines for 20 gold) to battle against other cards. This minigame is only three simple steps: Choose a main card (each has varying stats), Choose a support card (They have unique effects like "+10 ATK" or "Swap your opponent's cards", then just sit back and watch these two cards take turns to destroy each other. Do note, Cardass cards are used up the end of fights, so be careful when using your favorite characters. 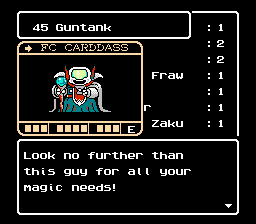 As a Gundam nerd and fan of RPGs since I was in middle school, I absolutely loved the concept for the game the second I heard about it. Upon playing it, it totally lived up to my expectations, as a standard Dragon Quest-like RPG with Gundam elements. Along with the Gundam fantasy world, it had some pretty odd but funny bits, like the first town having a GM named GM Hendrix, or the man who vents his frustrations with his dead-end job before saying "don't tell me how to live my life!" no matter how you respond.

Most battles are quite easy, with Gundam, Guncannon, and Amuro attacking enemies while Guntank uses magic for high defense enemies, and I find myself spending a lot of time mashing the A button to defeat enemies. This can get quite boring quite quick, and can even get a little annoying when you're trying to navigate a dungeon but you enter battles every 2 steps. That said, the humor, Gundam fanservice, and little details--like how characters will actually say a little line when they land a critical hit--keep me engaged enough to keep playing, as I slowly inch my way to Satan Gundam's castle to rescue the princess, collecting cards and talking to every NPC I meet.

I'm not too far into the game, on account of my own refusal to read a walkthrough when I get stuck and my dedication to playing Animal Crossing daily, but I'm certain to update this page with my thoughts along with interesting moments throughout.