This page will contain my thoughts an interesting observations as I play SD Gundam Story - Knight Gundam Legend.

Last knight I started the game, though I only got as far as the next town over. After defeating Amuro Ray, I got to the town, played one round of Cardass where I accidentally gave the opponent a really strong card, lost, then tried again and beat them.

Today, I picked up from there, making my way through an eastern cave about five times before finally figuring out how to turn Sayla back into a human from a slime. I've gotta say, that was confusing. Unless I missed something, no one mentions bringing the slate fragment to the old man in the southwest. Regardless, I made my way to the north, stopping at the town of Augusta. 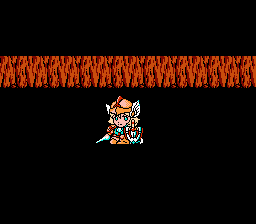 There, we met the knight Char, who is obviously the brother that Sayla said she was looking for, but whatever. After that chance encounter, we made our way further north to the Gallop Spire. Immediately, Ramba Ral appeared to stop us, and we defeated him in like 3 turns, and he disappeared with no dialogue, which is disappointing as I'm a huge fan of Ral. 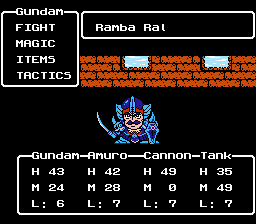 After obliterating my favorite Gundam character, we climbed the tower, crushing Goufs, Zakus, Doms, and Zeongs before plunging all the way down the spire, where we met the GIANT ZEONG. This big boy was the first real challenge of the game, as he had some pretty powerful attacks, often landed crits, and had a spell called BUZZ which just wiped my party. Despite this, we still came out on top, earning ourselves a neat magic shield. 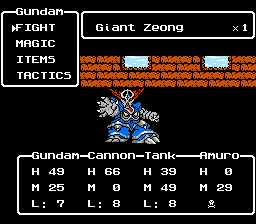 It was immediately stolen by the Black Tri-Stars. I'm going to sleep now.