When I was in middle school and early high school, I would spent way too much time reading Junji Ito. His detailed body horror, twisted bodies depicting grotesque things I had never seen before, it was amazing. I ate that stuff up, and even today I'll often spend some time reading some of his stuff (I'd recommend Hell Star Remina). And while there's nothing quite like Mr. Ito's work, World of Horror is the closest video games have been to capturing the atmosphere of a Junji Ito manga.

Developed by Panstaz, this game is a text-based RPG roguelite with a really great 1-bit aesthetic that reminds me a lot of manga. Something about the dithering all the sprites have really brings to mind the screentone that seems to be super common in Japanese comics. 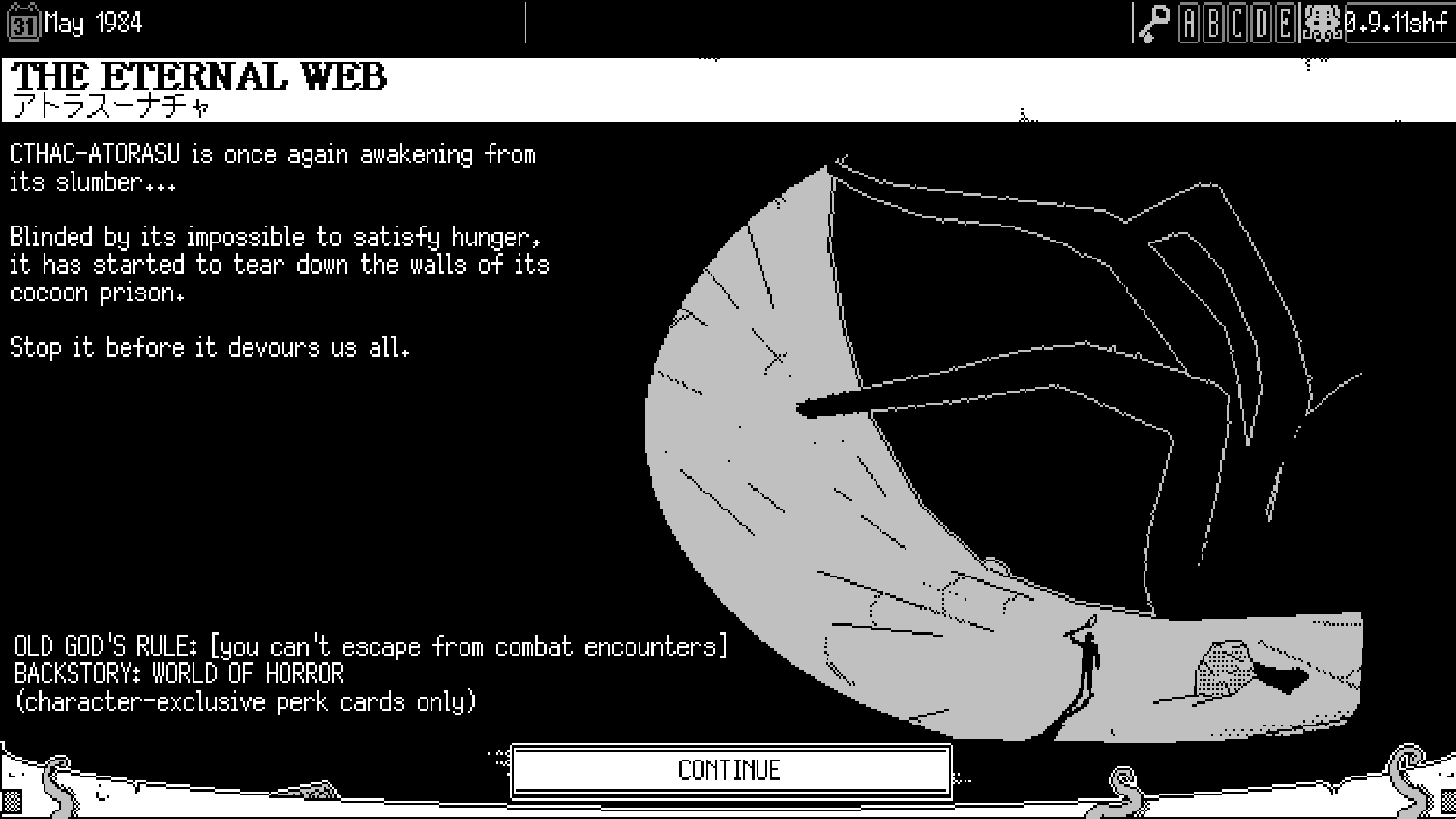 In the game, you spend most of your time solving 5 mysteries, with each mystery giving you a key to unlock a mysterious lighthouse. You must solve the strange supernatural goings-on, while also keeping in mind the deadly cult that inches closer and closer to the resurrection of their ancient god.

As a roguelite, the game randomly assigns you 5 mysteries from a pool of around ten (the game is still in early access and seems to have more mysteries and a slew of user created content on the way). You explore the town by selecting a location and simply clicking INVESTIGATE, and then a random event related to the location will play, usually inflicting some sort of damage to your character or entering combat.

Combat is turn based, with an action gauge that you fill with different actions like "KICK", "DODGE", or "SEARCH FOR IMPROVISED WEAPON". Enemies can deal two different types of damage: STAMINA or REASON. Both bars serve similar functions--run out and it's game over. You also have single-use spells, which have pretty powerful effects like healing, fire attacks, and even leaving any situation, but will have a pretty hefty cost, usually reason. 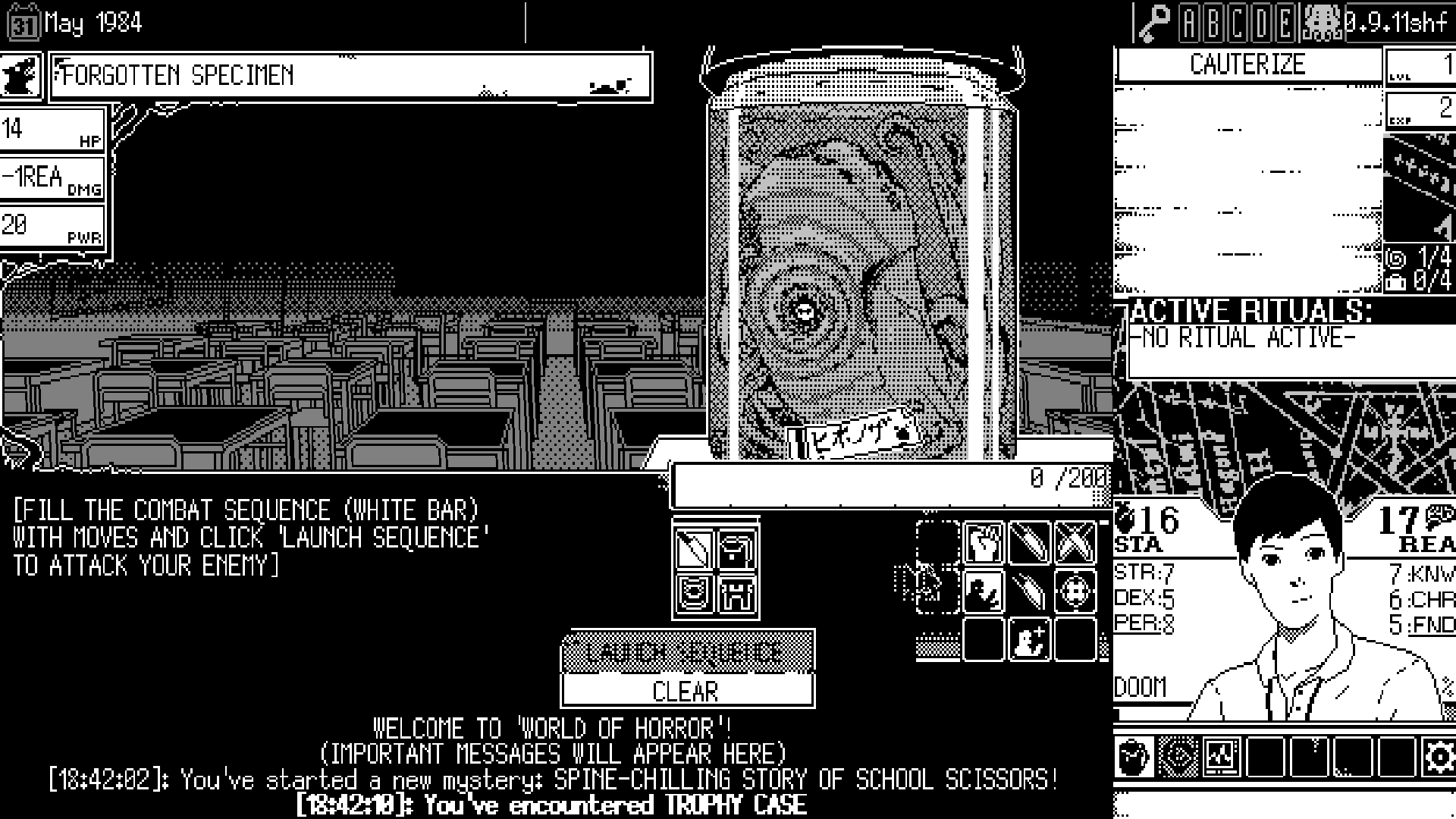 The game is fairly difficult, with your character often dying to horrifying (and really cool looking) monsters or people. I think it took me almost 20 runs till I managed to beat it, and that's not without my character getting pretty roughed up. 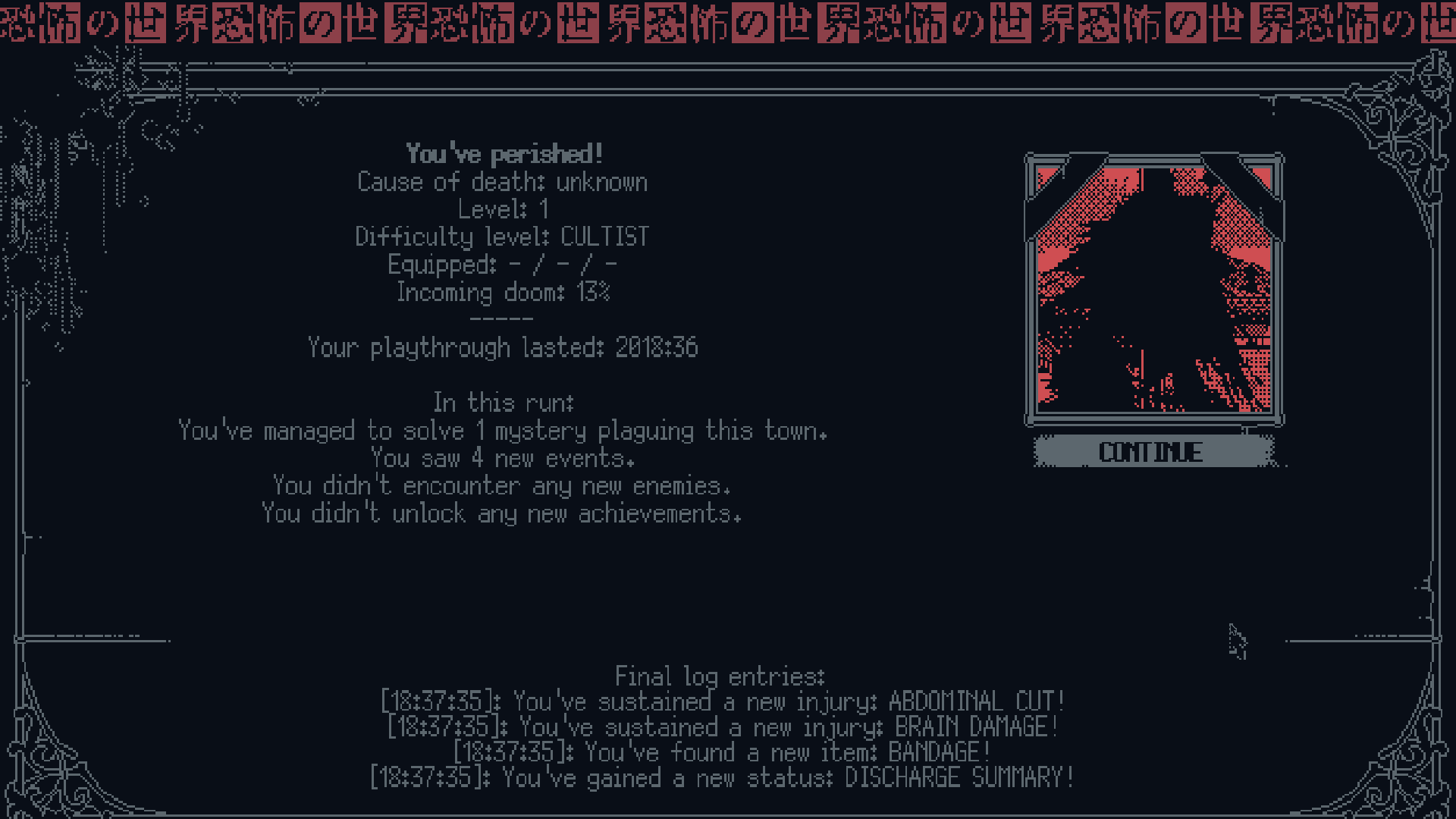 Overall, if you're a fan of Junji Ito, roguelites, or just dig the aesthetic, I'd totally recommend trying the game out! It's only $15 right now, and it receives pretty regular updates. The only downside I could see is that the game is a little buggy, but the game is still in Early Access, and things are getting patched out every day, with a pretty active Discord that the dev checks for suggestions and bug reports. I'll see you in ◯◯◯!/